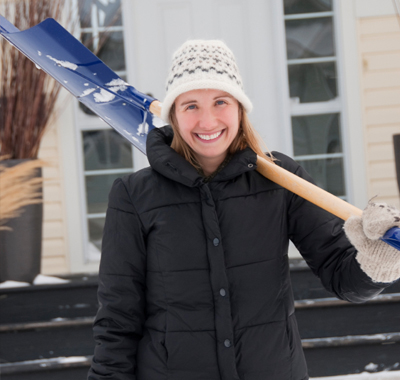 Shoveling snow often seems the ultimate dreaded cold-weather chore, but a few tips and tricks can help you make quicker and safer work of clearing your driveway, walkways and sidewalks.

Buying the right tool will make the job a whole lot easier, too. Considering one scoop of snow can weigh more than 25 pounds, Garden-Robinson recommends choosing a shovel with a smaller blade. Plastic shovels generally weigh less than metal. Also, pay attention to the length of the handle; the taller you are, the longer your handle should be in order to avoid hunching. A generous application of car wax or non-stick cooking spray prevents ice from sticking to the blade.

As far as technique goes, Mark Cinelli, a Massachusetts-based athletic trainer, says, “Never bend at your waist. Place your hands a good distance apart on the shovel, which helps with leverage, and push the snow.”

Salt, the most prevalent de-icing agent, can damage concrete, bricks and cars. Instead, sprinkle the following on ice to soften it before shoveling:

“Researchers have reported an increase in the number of fatal heart attacks among snow shovelers after heavy snowfalls,” says Julie Garden-Robinson, Ph.D., a professor at North Dakota State University. “One study determined that after only two minutes of shoveling, the heart rates of sedentary men rose to levels higher than those recommended during aerobic exercise.”

To stay healthy and safe while shoveling, Dr. Garden-Robinson recommends: