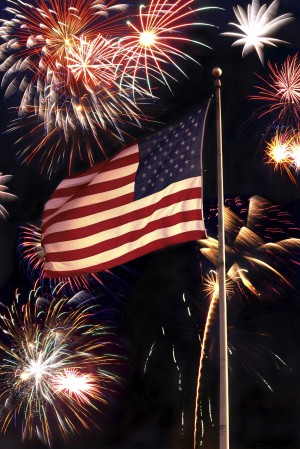 For most of North America, July is synonymous with fireworks. Whether it is Independence Day Celebrations in the U.S.A or Canadian festivities, fireworks are the centerpiece of many civic celebrations. The crackle, boom and flash of fireworks have not just amused us for generations; they have entertained folks for nearly two millennia. In fact, the history of fireworks is almost as colorful as their displays in skies across the globe.

Fireworks are widely believed to have originated in China. According to the History Channel, around 200 BC, folks in China would throw segments of bamboo onto a fire. Water in the sealed segments would turn to steam and burst the bamboo with a loud snap. Some four hundred years later, an enterprising citizen combined this old practice but filled the bamboo segments with the newly invented gun powered. And with a BANG! ...... Fireworks, or least firecrackers, were born.

A few hundred years later, the technique for shooting fireworks into the air was perfected. Fireworks then became both a tool for inspiring awe and a tool for combat. By the 13th Century the techniques for making gun powder and fireworks had spread across the known world.

Interestingly enough, John Adams one of the founding fathers on the eve of the publication of the declaration of independence, predicted that fireworks would be a key part of celebrations in the hoped for new nation. Mr. Adams wrote in a letter to his wife Abigail that “The day [July 4] will be most memorable in the history of America….I am apt to believe that it will be celebrated by succeeding generations as the great anniversary festival. It ought to be solemnized with pomp and parade …and illuminations (an antiquated term for fireworks)..from this time henceforth."

In the US, the 4th of July fireworks show in New York, started by Macy’s in 1958, is one of the longest running displays. With more than 40,000 shells, launched from 4 barges, it is choreographed with music. North of the border, Niagara Falls, Canada boasts the longest running fireworks display in the country. Displays run through the summer but are especially popular during national celebrations surrounding Canada Day on July 1 or each year.

Or course as the saying goes, all the glitters is not gold. Fireworks are the source of fires, injuries and even death. According to the American Pyrotechnics Association, four people die on average in the U.S.A each year as the result of fireworks and a jaw dropping 9,300 people are seriously injured. Also, 20,000 fires are attributed to fireworks. Firecrackers account for 1 in 3 of fireworks related injuries. In Canada, approximately 200 children and adults are injured by fireworks each year.

Regardless of if you are celebrating the U.S.A.’s 238th birthday on the 4th or Canada’s 147th birthday on July 1, enjoy the nearly 2,000 years of work that went into lighting up your sky. More importantly, remember to have fun and also be safe!