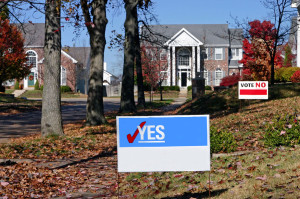 Few issues elicit as much emotion as politics. Political discussions can turn a family dinner into a shouting match and even drive the best of friends into enemies. Adding fuel to the fire is record spending on political advertisements that promise the end of America as we know if the opposing candidate wins.

Thus, dealing with political signage in your community is an issue that must be approached with sensitivity, especially with election season fast approaching. So, as we gear up for November’s elections it may be worthwhile to think about political signs in your neighborhood.

There is a misperception that because a political sign is a form of speech, that it can’t be regulated by the community association on first amendment grounds. This is not accurate. The first amendment applies to the government’s ability to regulate activity. While community associations provide governance within their neighborhood, they do so through deed restrictions and rules, which are more closely related to contracts between the residents than to government.

Therefore, because citizens are free to make agreements among themselves to govern their community, regulating activities in their community, including political signs, is an expression of a citizen’s constitutional sovereignty.

As with any issue related to community rules, understanding your rights as a homeowner or responsibilities as a board member when it comes to political signs in the community is very important. And these rights and responsibilities will be governed by a couple of sources. First, if there is a question on what regulations are in place for political signage in your community, look to the community rules. If there is a rule in place, this is where it would be found. Read the rule and if there is a question as to its application, reach out to your board or community manager.

Second, even if your community has a rule related to political signs, it is possible that the rule is limited by state statutes seeking to protect homeowners’ rights to express themselves. Typically the state statute allows the association to regulate size of signs as well as time, place and manner of display. In these states, while the association can’t prohibit the display of political signs, it can regulate them.

When it comes to enforcement there are three critical factors the board should consider.
1) Is the board action subject to a written rule in the governing documents?
2) Is the rule being enforced in a fair and consistent manner?
3)Does the rule comport with state law?

Making sure that these questions have been answered will help ensure the level playing field for all residents.

As with holiday decorations, religious symbols and the American Flag, some areas of association regulation are more sensitive than others. So, with election season approaching, reviewing election sign rules and enforcement will keep the debate on the candidates and not on the association.