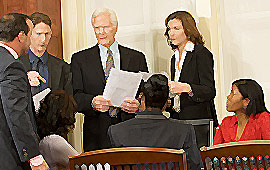 Robert’s Rules of Order is a series of procedures written by Mr. Robert, who was a U.S. Army engineering officer. When asked to preside over a meeting, Robert realized that there was no international standard of conduct with which to rule. As a result he studied parliamentary law and wrote Robert’s Rules of Order.

What is Parliamentary Procedure? It is a set of rules for conduct at meetings that allows everyone to be heard and to make decisions without confusion. Robert’s Rules of Order is the most well-known and documented book addressing meeting conduct.

Basic Parliamentary Procedure. Here are some of the rules that help move a meeting along in an orderly, respectful and cordial manner. If the board approves the use of parliamentary procedure, it is important that the board members review and practice the guidelines to ensure that every member feels informed and prepared to fully participate in meetings.