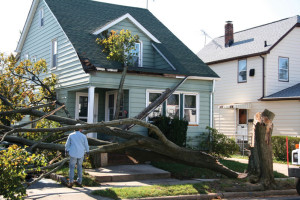 Residents of condominiums and HOAs pay the same federal taxes as everyone else. In fact, because residents of community associations pay for many of the services and amenities that a local government would provide to a traditional community, they actually make a positive contribution to keep taxes low, and property values high.

But, as many HOA residents discover after facing disasters, when it comes to getting assistance from the Federal Emergency Management Agency (FEMA) to assist in community recovery efforts, outdated language in the law can leave them outside the scope of federal assistance.

At issue is how FEMA interprets the provisions of the Stafford Act, which outlines its authority. FEMA officials view property damage, including damage to roads, debris removal and other events within a community association to be on private property, thus preventing them for assisting in initial recovery efforts. According to FEMA, since residents assess themselves for the upkeep and repair of common elements, FEMA is prevented from duplicating this responsibility in times of a disaster.

The application of this interpretation has been at best inconsistent. As reported recently in Common Ground Magazine, FEMA sometimes steps up and other times rejects requests for help in community associations. The article noted that condo residents in Nashville received housing assistance from FEMA after severe flooding, but no assistance related to damage to the community club house. Another example provided by the article notes that a FEMA assisted in the removal of debris in a Florida community that was placed outside the gates of the neighborhood. Cooperatives seem to fair the worst when it comes to requesting federal emergency aid. Since the cooperative housing model is a shareholder organization, FEMA considers them a business.

That said, change may be on the way. Following Super Storm Sandy, residents in the Northeast discovered the hard way that when it comes to community associations FEMA is at best a hit or miss proposition. Led by the industry, legislation (HR 2887) has been introduced to address these issues as they related to condominiums. It is hoped that if this legislation moves forward, it can be expanded to address FEMA issues experienced by residents in HOAs as well. After all, residents in community associations pay the same federal taxes to support FEMA as residents of traditional neighborhoods do.

While a solution is pending, reviewing community disaster preparedness plans, insurance coverage and local recovery resources should be high on every community’s “to-do” list.