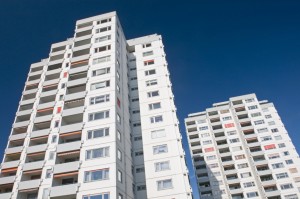 Ask someone where the first condominium was built in the U.S. and most of them would probably guess Florida. A few might even share an anecdote of how their cousin’s, in-laws parents owned a unit in the very first condominium building ever, in Palm Beach, or Boca or somewhere nearby. But the reality is that the roots of the modern day condominium go back far longer than most people realize, back perhaps to the 19th century. So where and when did the modern concept of a condominium emerge?

First let’s make sure we are all on the same page as to what constitutes a condominium. The present understanding of a condominium is that it is a housing concept where the owner has title to the condominium unit, typically starting from the walls inward, and they share in the ownership and responsibility for maintaining the common structural elements and amenities if any.

By that definition, recent historical accounts trace the condominium back to New York City in the 1800s. According to Hunter College assistant professor Mathew Lasner author of High Life: Condo Living in the Suburban Century, the first condominium was built in New York City in 1881. It had eight units and was developed to address housing needs of city dwellers who did not or could not afford a single family home, but did not want to be renters. Mr. Lasner even tracked down the name of the first buyer in this building, a journalist name Junius Henri Browne. Although the building has since been demolished, it is seen as the first multifamily building that we would recognize as a condominium.

A number of issues have limited the appeal of condominiums, including cheap land, cities needing room to grow and financing. In the early 20th century, Puerto Rico passed the first modern condominium statute, called a Horizontal Property Act. This provided a legal framework for developers and purchasers to deal with the ownership and maintenance issues that arise from the co-ownership of common elements. The law was updated in 1958 and American developers soon picked up on the concept.

Graystone manor, built in 1960 is cited as the first modern condominium in the United States and was built shortly after Utah adopted a state Condominium Act. Shortly after the Federal Housing Administration began allowing federally backed funding for condominiums, the flood gates were open. Today there are more than 30 million condominium units in North America a number that will continue to grow in the years ahead.